Yet, Another NP-Complete Problem. Kleinberg and Tardos' exercise 38 of their algorithm design book 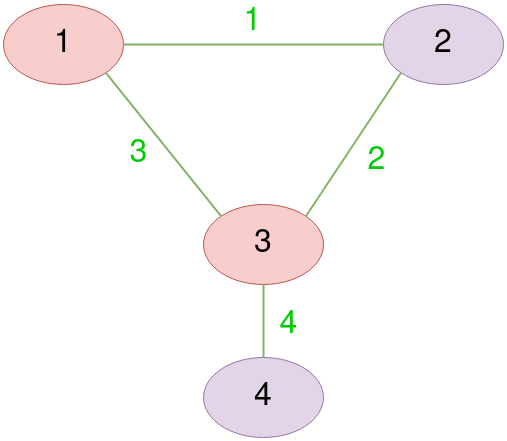 We prove the graphical steiner tree problem is NP-complete by reducing vertex cover to it. The version of it is taken from our favorite Kleinberg and Tardos' Algorithm Design book’s exercises. We assume the reader is familiar with vertex cover, what NP-completeness is and the general approach for proving it by reduction.

Here is a clear definition of the problem we prove its NP-completeness, Taken from klienberg and tardos' exercise 38 of chapter 8, NP and computational intractability.

Before showing a rigour proof, We present a simple example which demonstrates our approach. We begin with a vertix cover example, then accordingly encode it into an instance of the graphical steiner tree problem. We give some insights why finding a solution to the latter accounts for a solution to the former, and Hence argue our claimed proof is correct.

Clearly, A subset $G(V)_{red} = \set {1, 2}$ has the minimum possible number of elements which enables covering all edges $G(E)$. Now let’s see how it is going to be encoded into an instance of a graphical steiner tree.

Construct a graph $G'$ whose vertices $G'(V)$ are the unions of,

Accounting a Solution for Vertex Cover

Let’s remark how a solution of encoded Graphical Steiner Tree yields a solution to Vertex Cover.

By definition of Graphical Steiner Tree, and definition of X, $G'(V)_v$ vertices must be connected to $S$. For each, There are two pathways, Either connecting backward via $G'(V)_o$ with cost of two edges, or connecting forward via $G'(V)_e$. So there is a penalty on connecting backward, and the algorithm is obliged to connect forward as much as possible to reduce the number of edges. In other words, We could reform the algorithm’s goal as, In order to connect $X$ in a single component with least possible edges, What is the minimum number of vertices of $G'(V)_v$ needs to be connected backward;y?

The trick here as shown from the example is that we reduced vertices covering edges in vertex cover to vertices connected to other vertices in graphical steiner tree.

Now let’s present some more rigour remarks of our reduction. For the sake of readability, We intentionally omit the definition of constructed encoded instance of graphical steiner tree. We believe the above discussion suffices to convince the reader. In addition, We assume on behalf of the reader to see why both theorem 1 and theorem 2 suffices to prove intended NP-completeness.

Note the definition of $k'$ is stated above.

Clearly, Mentioned edges exist. Also, $X'$ (see its definition above) is a single component in the graph, As all needed vertices are connected to $S$.

I acknowledge that might not be a complete proof, However we believe it suffices for anyone with minimum familiarity of computational complexity theory or NP-completeness. We did really enjoy figuring the trick of reducing covering edges by vertices to connecting vertices to other vertices. After all, The literature is crammed with proved NP-complete problems. I guess a first-look in Computers and Intractability: A Guide to the Theory of NP-completeness by Garey and Johnson delineates this blog post trivial. However, I am happy that I was able to think from a different perspective to figure this problem out by only the aid of Kleinberg and Tardos' book.